Update 2: Microsoft has released a much better ad serving solution than AdMob, this was just a stop gap in case nothing official was released.  This control is old and busted, check out the Microsoft Ad SDK for the new hotness.


After seeing a project on CodePlex that allowed you to display AdMob ads in a Win Phone 7 application, I decided it would be a good project for another custom control.

The main problem I saw with the existing control was that it didn't take advantage of the styling and "Blendability" of the Win Phone 7 platform. Basically, the control used a web browser control to display an HTML template that was updated with ad information. 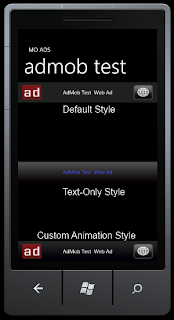 Here is an example of three different styles for the same template, the top is the default template, the middle is a text only style, and the bottom shows a fading animation when the ads are refreshing. The animations are helped by utilizing the three states for the AdDisplay control; Loading, Normal and Error.

Another issue I saw was that it relied solely on AdMob, with very little flexibility for hooking up another Ad service (like a rumored Bing Mobile Ad Service), so I added an adapter pattern to the control.


Here is an example of using the provided AdMob Adapter with the control (notice this can all be done in XAML, no code behind).


I'm hoping to put up another post to talk about creating a custom "In-House" ad provider.


You can download the source from my DropBox account, or at the created project on Codeplex called MoAds.


Now Playing - Goodie Mob - Get Rich to This
Posted by Jacob Gable at 5:36 PM