I see this all coming in slow motion from the time he hocks the loogey and all I can think about is a straight up Yellow-Belt level straight kick to the chest, but then I remember I didn’t really ever get the Yellow-Belt so I slowly back away towards the back of the train while Butterbean starts the bull rush. I luck out and he trips over himself on some stairs and is faced down right in front of me with the other two guys behind.
At this point we are going on like a good 10 minutes of ruckus with this Butterbean behemoth and something in me snapped. I’m tired of trying to just keep this guy from hurting me and I’m ready to knock this dude out. I throw a kick that lands my lower shin to his forehead and the top of my foot slaps the side of his head, I follow up with a right hook somewhere about the face area. By this time the other two guys have come up and are a little surprised, everyone kinda is like “okay, okay, just hold him down, easy there…” 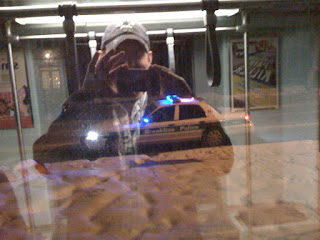 Look, I probably shouldn’t have hit the guy, but the cops weren’t there and I had already subdued the guy like 3 times, it was time to step up the alert level a little. A little bit after that the cops showed up and took him off the train. He got arrested for PI probably, but they asked if we wanted to press charges and we said no. When we were getting questioned by the cops they asked for our ID’s and I still have my Kentucky Drivers License, when I handed him my license I said “It’s my second week in the big city”. He laughed and said, “Aw $&*!, you’re from Kentucky, I’m amazed you didn’t have him strung up and skinned in here”.
So anyway, that was pretty exciting.
Now Playing - Nappy Roots - Country Boyz
Posted by Jacob Gable at 11:15 PM No comments: 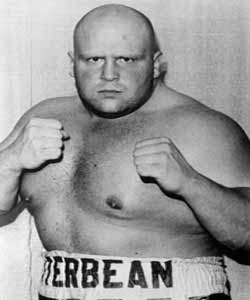 I’ve got him from the side, in side-guard if you will, while we’re both standing up. I’ve got my right hand around his chest and up under his arms and I’ve wrapped it around and grabbed a pole with both hands. So, I’ve got this guy pretty jammed up, he’s not moving and I’m not even squeezing that hard. I start saying “hey man, be cool, be cool, I don’t wanna fight you, just be cool”, but he is going nuts and fighting to get out and get after Nick. But he isn’t trying to hit me. In the mean time, the hot chick (who I might add, is the starter of this whole thing because of her being a Skinny Rich Hot White Girl) is freaking out and has run to the very back of the train.
There are only 4 people on the train at this point, Me, Nick, Hot Chick, Butter Bean, and some College student who was passed out in the front of the train at the beginning of the fight. This is when the most cowardly train driver known to man decides to get involved. The train driver is like 50 with gray hair and a bushy mustache like some kinda Russian circus ring leader. He’s got big glasses and he keeps repeating throughout the entire ordeal “aww geez” almost like that voice of the turtle in Rocko's Modern Life. So he comes back to the middle of the train and he starts telling me to just let him go so I start to ease up, but then Butterbean starts to try and bite my arm and then he takes off after Nick. 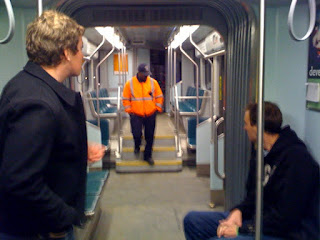 Sometime right before this the college kid has woken up and is stumbling back to figure out what is going on, right as Nick is running past him to the front of the train and Butter bean is hot on his tails. So the bleary-eyed college kid kinda clotheslines butterbean and just tries to keep him down. Meanwhile, I’m having flashbacks of being punched in the face at Jason’s Party and I run up and am like “I’m here brother, I got you, I got you” like me and the college kid are sharing salads or something. And so me and the college kid are keeping him down and Butter Bean is En-Raged, getting madder by the second. Meanwhile the “Aw Geez”’in train driver is like “just let him up and he will get off the train” so we eventually let the guy up and he runs after Nick out the train.

Nick played lacrosse in California before moving out here to work for the Red Sox as an intern, so needless to say, he has some moves. Nick throws down a sweeeeet double deek swoop-dooper and scoots back on the bus with Butter Bean left in the dust outside the train. So now we’re yelling at the driver, “Close the door, close the door” but this guy is like “I can’t do that” and he stands at the top of the stairs trying to do what I can only think of as Jedi Mind Tricks… “You will get off the train…”, “These are not the boys you are mad at…” and all the mean while this guy is looking right at me now all cross-eyed and drooling going “I’m gonna kill you… Then I’m gonna kill you…” looking over to Nick and the college kid like all of a sudden were on WWE Monday Night Raw or something. Then he hocks a big loogey in the Cowardly Jedi-Master train drivers face who then ducks outta the way so frickin butter bean has a nice path to bull rush at Nick and I.
I start thinking about my youth... specifically the Karate Lessons I started to get tired of and never finished...
Now Playing - Bon Iver - Skinny Love
Posted by Jacob Gable at 10:59 PM No comments:

Alright so, let me tell you about this fight I got in on the subway the 2nd week I was here. It’s nuts. Me and one of my roommates Nick went to a bar to watch the UFC fight. We went to this bar right next to Fenway, where the red sox play. The bar is right behind the “Green Monster”, the big wall in left field. Anyway, we watched the fight and I drank some beers but I was pretty straight (That’s another great thing about the subway, you can be totally blasted and still have a ride home, just make sure you take a piss before you leave… you may even wanna take two pisses).

Nick doesn’t drink, so he was sober the whole night and we headed back to the subway station about 12:30 at night. We watched some dude take a piss on the floor in the station, and get arrested… (Obviously he did not take two pisses before he left) Then the train came and we hopped on it to get home. 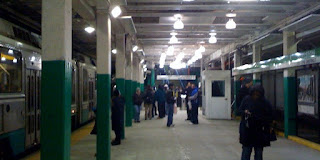 Let me kind of describe the trains, the Green Line (A,B,C,D are all Green Lines) is where I live, I live at the end of the C line (Called Cleveland Circle) but you can also take the B Line to Reservoir and there’s a little side dip that will get you home… or raped… it’s 50/50. The trains on the green line are more like trolley cars, but enclosed. The C line runs in the middle of this long road called Beacon that runs right into downtown. C Line trains have to stop at stop lights and shit, but they are riding on rails, the rails just run in the middle of the street, kind of like where the median would be. So, there is usually two cars to a train, and there is like a little middle part that is like an accordion so it can flex between the cars when the train goes through a curve.

When me and Nick got on the train the only spots left to sit were on the middle part and there was a kinda hot girl and this bald Butter Bean looking dude kinda dressed up. He had like a tweed sport coat and tie on with some dress pants and dress shoes. This guy was wasted, and he was trying to holler at this girl. Asking people for a pen on the train and being all obnoxious. So me and Nick were trying to kind of diffuse the situation, because we could tell this girl was uncomfortable and she was all by herself. 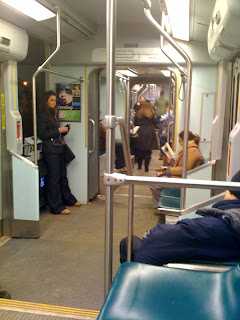 So anyway, we were just talking to this guy, asking where he came from, how much did he drink tonight and kinda laughing at him. The girl started to chirp in with little comments and he probably thought we were making fun of him. So this goes on for about 15 minutes and the ride home from the bar is about 25 minutes. All of a sudden this guy is just stone cold quiet for like 4 stops on the train, it was a good 5 minutes. I look over and this guy is like super-duper mean mugging Nick who is sitting across the aisle from me in a separate seat by the girl. Nick notices it too and so he starts smiling and is like “Hey man, you’re being awful quiet over there”, but this dude is still just super mean mugging him so eventually Nick is like “Alright man, you win the staring contest” and he looks back at me across the aisle. I smiled a little bit and started to change the subject, I asked if any of the other stops on that line were faster than just going all the way down to the end of the C-Line like I always did.

So all of a sudden while we are talking this big Butter Bean dude gets up and is like “fuck you fuckin boston college kids,” and starts walking toward Nick and leans back and throws the slowest haymaker I have ever seen in my life. It was like slow motion it went so slow. Nick just kind of moved out of the way and the guy hit the window and fell on top of him so I got up and somehow put this guy in some kinda 1/8th Nelson and grabbed onto the pole.

I was holding on for dear life...
Now Playing - Kanye West - Stronger
Posted by Jacob Gable at 10:22 PM No comments: